YouTuber Celebrity Status: What Are We Letting Them Promote? 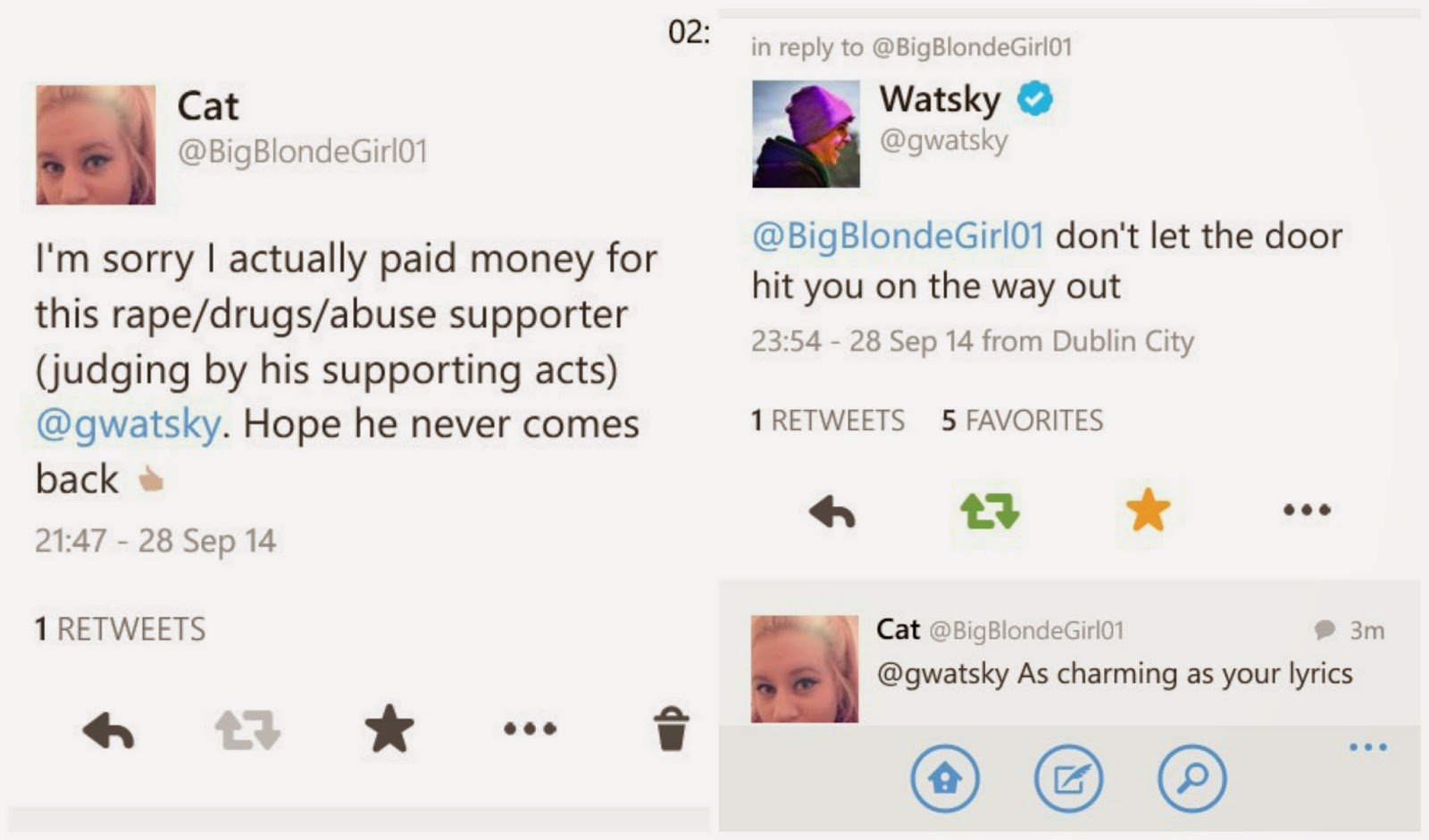 We all know I'm not one to sit down and be quiet. Most of the time thats why people come here and read my reviews - if I don't like something I'm not going to beat around the bush. And again, if you come here often enough then I'm sure you'll have read my post about rape culture (if not don't worry. Heres a link) Some facts, if I may;

Now, let me get onto the reason for the above. On Sunday night I went to a gig in the Academy to see a YouTuber called Watsky. (I went along with a friend, it wasn't my choice of music). It was a no alcohol 14+ night so there were naturally a lot of young underage children at this event. Watsky is from the US and has a huge following with his rap and poetry videos. All is well and good here, I don't belittle the fact that this fella has some real talent and for some part at least, is informative and speaks about positive things within his music. I'll be honest and say I wasn't too familiar with him or his content - social media interactions, lyrics of videos, thoughts on controversial topics. The same goes for the acts that were supporting him. But as I stood at the back of the venue watching and listening to the antics of the night, I soon began to not only be disgusted, horrified and offended, but downright saddened to see this type of behavior in 2014.

Look, I'm not going off on a mad rant here (I swear I am containing myself) but this is what I saw. Young people, some I suspect under the age of 14, waiting in excitement for this man who they know from the internet, a celebrity of sorts, someone they look up to, think is really cool and respect. The opening act had one song in particular that I nearly keeled over listening to. It was called 'Drugs' by Anderson Paak. Some of the lyrics are like such;

Next up, was some Welsh band who cursed their way through every single sentence. Talking about politics, Ireland and things along the lines of 'fuck the English/Queen' and so on. These comments were cheered on and I couldn't help but look around at the really young people who clearly didn't have a clue what they were taking about. - I'm not saying these young people were uneducated or ignorant, they were just too young to know what the topics were properly about, how it would offend an older crowd. Some did genuinely look confused. I can't say much about their songs as they were one of those loud bass and mummbly kinds of artists. But none the less, they left their (lack of) political impressions.

And then onto the final act. After listening to songs and speeches of drugs, politics, sexual violence and drinking, it was Watsky himself. I was actually looking forward to hearing this guy, he can rap quite fast. But he left me disappointed. Stripping in front of a young crowd, promoting the topics of his supporting acts and then the final straw. Between one of his songs he stopped to tell the audience - let me remind you these are young impressionable people listening to what could be their idol, telling them that drugs are great. You don't have to do them, but you should. Why? Because they are fucking great... Aannnd the (children) crowd goes wild at his wise words. 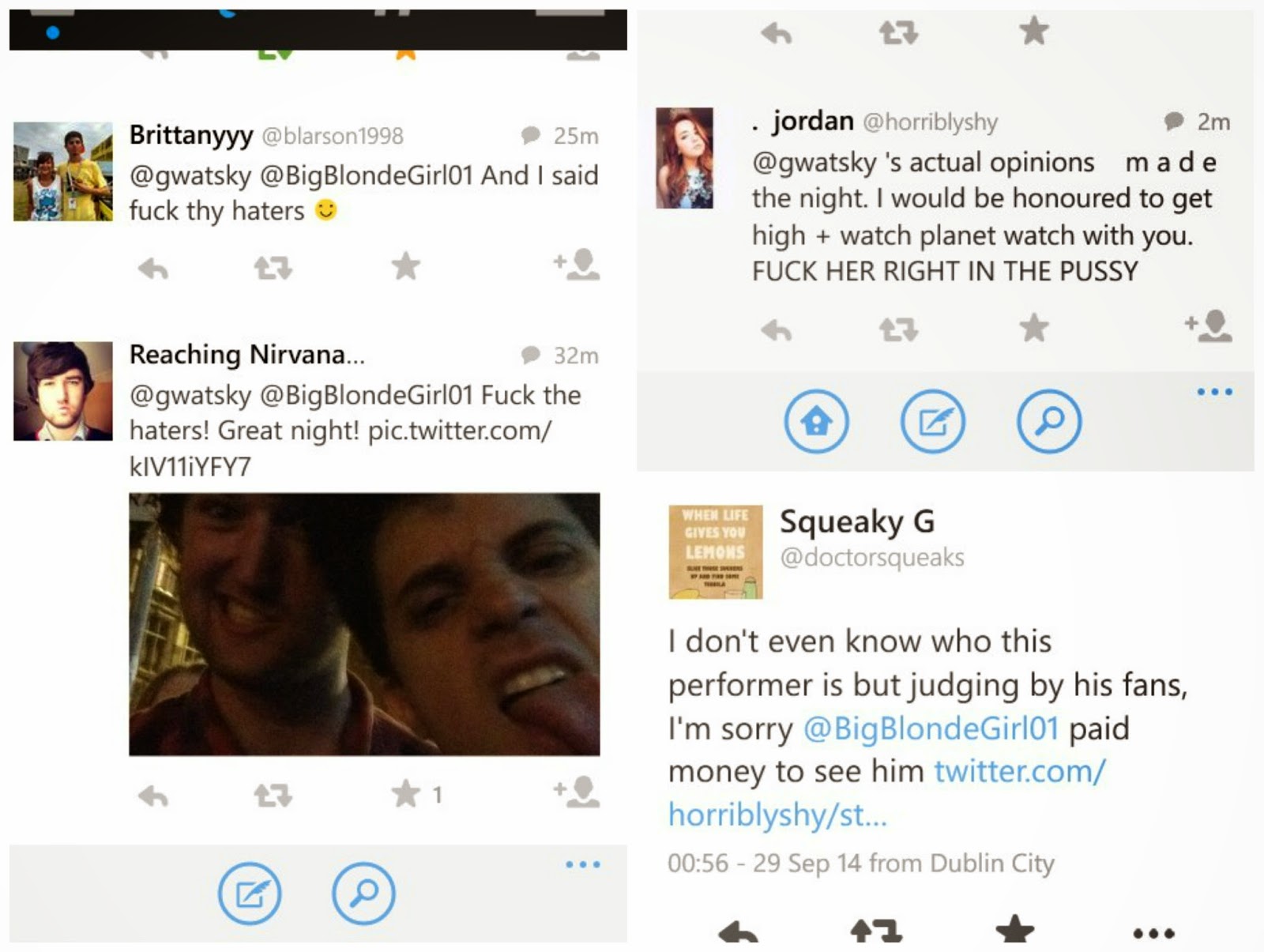 To top it all off this no alcohol event for minors had all the performers clearly seen drinking. I naturally tweeted throughout the event voicing my outrage and when the event ended, I got a lovely reply from Watsky himself. I'll admit, a little part of me is delighted to know that I got under his skin enough by calling him out that he replied to me. (Hey, girls got claws too.) Sure enough his fans soon started tweeting me general abuse (lions and tigers and ... Children, oh my!) but all of these fans were teenagers. Some of the things they said were saddening, about raping me, abusing me and threats. Thankfully this didn't bother me in the 'I'm scared' sense, but rather in the 'I'm sad for this generation' sense. ''fuck her right in the pussy''. (Un)fortunately for this teen, rape culture is been kept alive and well. Oh what am I saying, it would still be thriving even if this comment wasn't made.

Watsky is an adult who, fair play, has made himself a popular guy and is making a living doing what he loves. But why then, with such a young fan base, promote these topics of drugs, sexual violence and worse to them? This isn't a question directed to just him, but of course to all who have a following, a celebrity statue. I'm aware its half just shock tactics, 'to be cool', to 'not be one of the crowd'. But good god, at least keep your clothes on and tell the minors who have paid to see you that drugs aren't ok to do.

Of course this isn't new. This is just one of many. Those who are internet sensations who are just getting worse and worse (que generic comment about Sam Pepper). And yes, there were certainly some older fans present at that gig. Hell, have a go at me, I promote sex toys and safe consensual sex to whoever might read my blog. There is so much to argue here, so much to talk about. But at the end of the day, this is just one opinion. However for those that agreed with me and voiced their opinions, I'm really grateful for the support, thank you. I'll leave you with a Watsky quote. I hope he practices what he preaches:

''There's 7 billion 46 million people on the planet and most of us have the audacity to think we matter''.
Posted by Unknown at 02:37