If you've been hear for a while then you'll know all about my Sunday carry on. If not, then welcome to #SexualSunday where I post every Sunday with something sex related. Sometimes its a Dublin sex shop review and then other times its me ranting about anal or porn.This week its the one I've been threatening for a while now, I went speed dating. For those of you who weren't following me on twitter (shocking!) then you wont have seen my live tweeting some of what was going on. I previously emailed GetOut.ie and asked if I could talk to them about their site and go on a speed date. I'm cheeky like that you see. The lovely people over at GetOut happily sat down to answer my never ending questions, so a big thank you to them for putting up with me! I did not pay for my evening, but nor is this a paid for review. So all the opinions below are totally my own, as are my poor attempts at chatting men up and managing to mortify myself and those around me. A massive thank you also to the utterly wonderful hostess on Thursday night for making sure I was looked after and who was a mind of information, utter credit to the GetOut team. But before I tell you about the dates, lets get a bit of background for you to chew on.

Originally I was vaguely appalled by the idea that not only would someone pay money for an online dating service, but they would then be willingly herded at the 5 minute mark around a room to talk to each other in awkward social settings. I didn't like (and still don't) the fact that there were ageist restrictive groupings and as the age goes up, so does the price. I put these questions to a member of the GetOut team who sat down with me for a chat and he made a few holes in my points. Those who might be sick of the club scene or online dating might want to actively seek out a real conversation face to face in a safe and controlled environment. Theres no swapping details so if you don't want to talk to them again, theres no obligation to do so. Its also a way to get to go on mini dates with several people for less then if your forking out for a full date with someone who you might never speak to again. And then the simple fact that people are actively paying to look for something more then casual dates or random flings. Overall, in my opinion very good points were made for both the pros and cons.

GetOut host events all around the country several times a month, so there are plenty of options and times to choose from. I booked only hours before the evening as I was attending an event only around the corner. You can see the full list on their site and email or call to book and then get a conformation email telling you the time, venue and some tips on how to get conversations going, even pointers on how to dress. A lot of people, especially women I was told, go in groups with friends. I think this is both a good and bad idea, but if your going to try speed dating, do nights on your own and also with friends. You will get such different experiences from them! If your not too sure about the whole meeting face to face just yet, GetOut does have an online dating site where you can sign up to create a profile and have a look at the people out there that you could potentially match with. The GetOut staff are also friendly and helpful over the phone (I called and didn't state who I was the first time, so there was no bias conversation) so if you have any questions or worries they will be able to answer them. 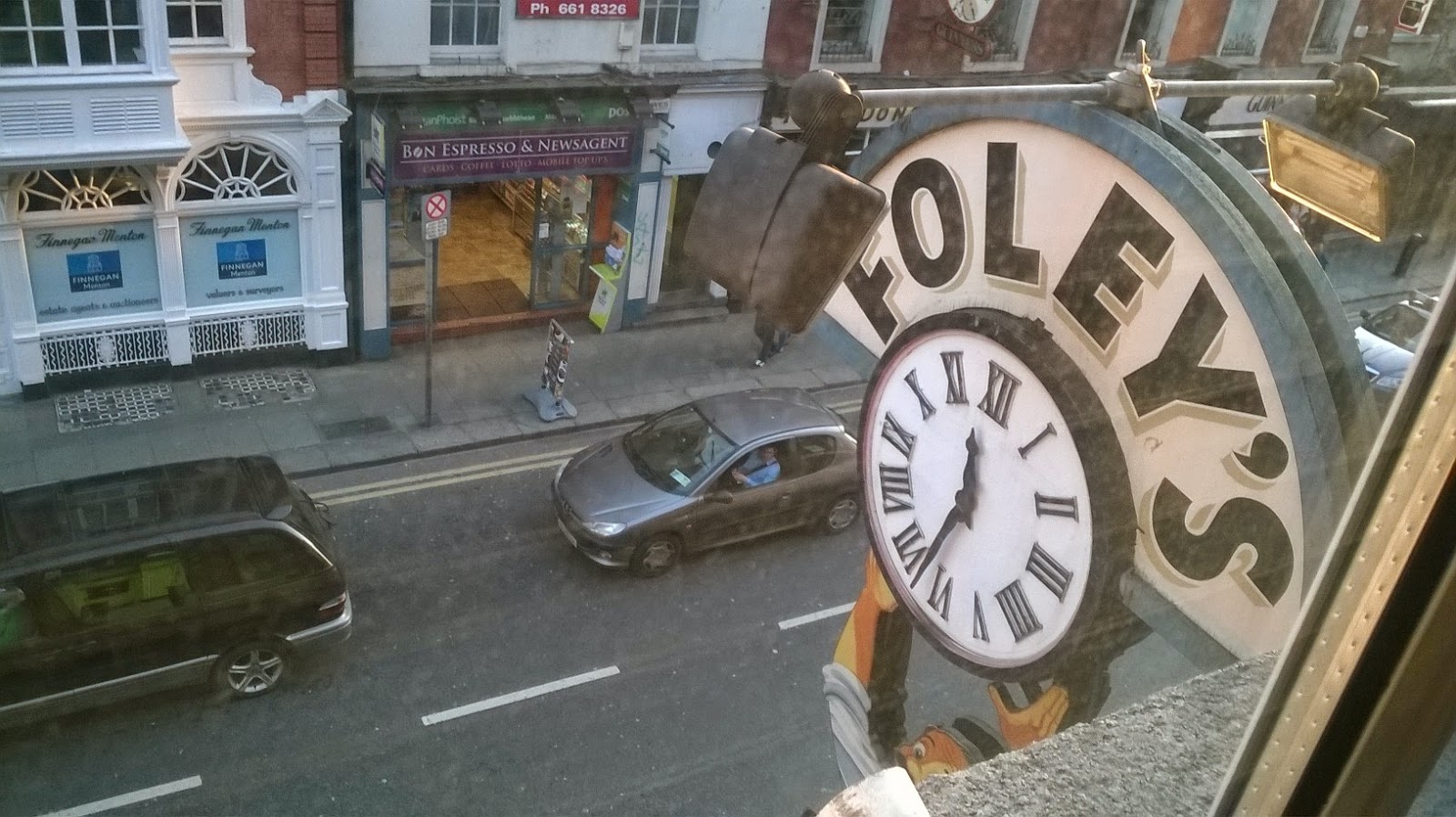 Now the event itself. Personally I didn't really have enough time or energy (man was that day warm) to be nervous about meeting lots of new people, I just concentrated on not being the last straggler in the door. The venue was Foleys bar, which was dead easy to find and I inquired at the bar where abouts the speed dating was going to be held. After asking lots of staff on the several floors above, I finally found the right room. I was first there so I signed in and chatted to the hostess while waiting on the others to arrive. This was the 26 to 35 dating night, so I felt I was going to stick out like a sore thumb a little, but it was also nice to know that the age limits on the site weren't super strict so both younger and older people could attend the events. The first half an hour was the worst part as people slowly poured in and we all waited around. The men gravitated towards the bar (which didn't have staff to serve on it! Major minus points all round and everyone who I talked to commented on it too.) While the women sat in little groups chatting. I talked to three German girls who came in a group and asked if they had done this before. The general feeling was all three had in the past and it was a great way to meet new people in a safe and controlled environment. I was actually surprised that they brought up the safety element as it never features too high on my list when meeting people online in the past.

While I waited, the hostess handed out name badges to everyone and explained how the night was going to work, letting the men rotate tables every 3 to 5 minutes while the women remained seated. Just as well considering I had a tonne of bags. Some which contained makeup, shoes and new knickers from shopping earlier that day. (At least I'll never be accused of being classy.) We also got cards to write the persons name and badge number on, along with ticking a box of yes, no or just friends. I noticed that one of the first men to come into the pub was slowly making his way around the groups of women - which is perfectly fine and well. But he came across as very full on and several women leaned away from the table when he approached them. After the event he was also standing outside the pub talking to every woman who passed by and if I was anyone else I would have found his behavior intimidating and totally off putting. However the hostess was busy with other things and to be honest is there much GetOut can do in a situation like this? I wouldn't say so considering he wasn't actually doing anything wrong. Bit of a sticky one there, but just thought it was worth noting. 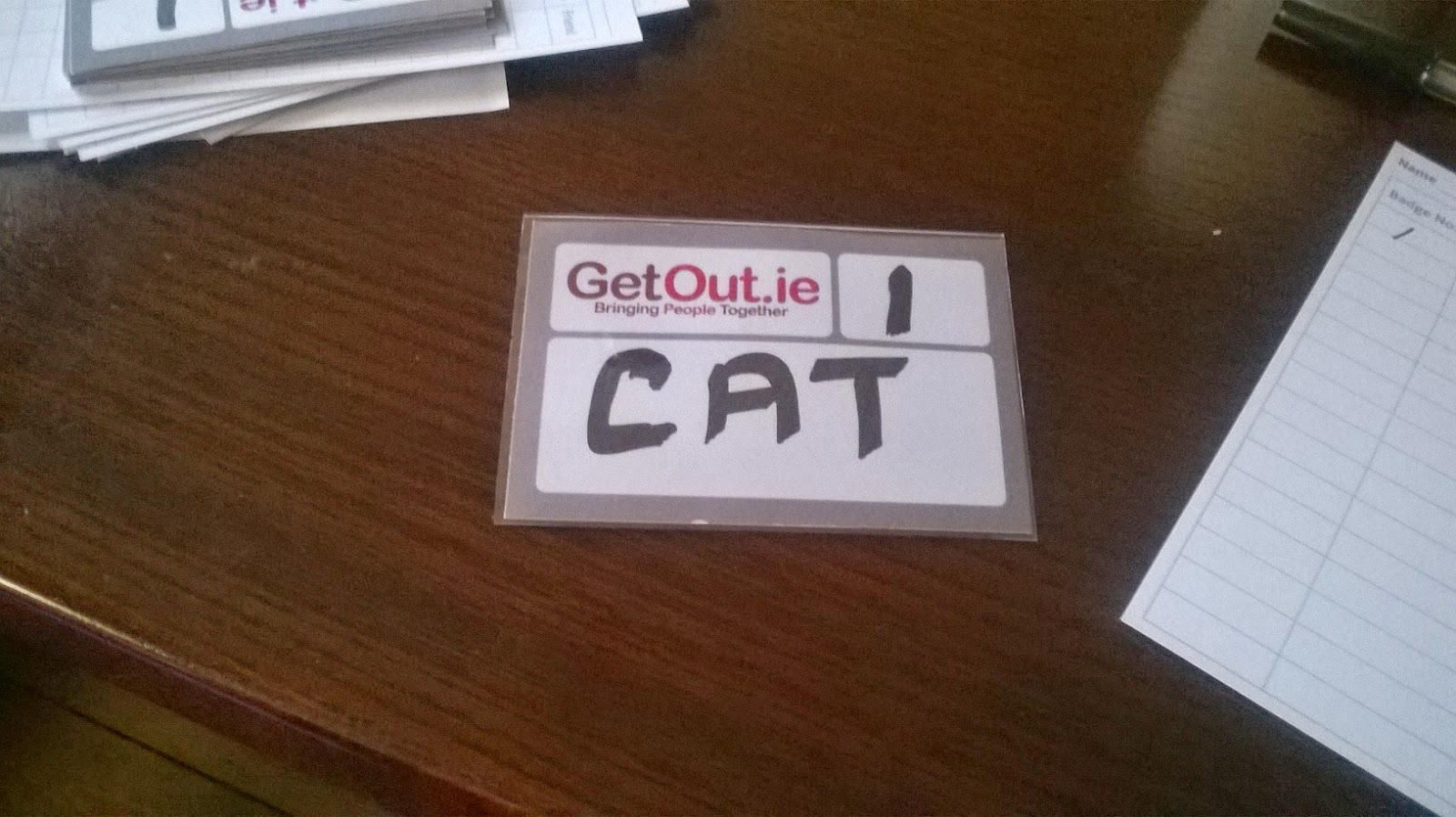 Apart from that one very off putting guy, the rest of the dates went very well and I found that I actually properly enjoyed myself. I was nervous to start with, trying to concentrate on asking general questions and avoiding telling the guys that I came to review the event when they asked why I was out tonight. There was a funny mixture of very professional people, I spoke to a guy who worked in a bank, an accountant, a chef and a doctor to name a few. It was impressive to say the least, but naturally everyone was nervous and on their best behavior so there were many 'I like to read, run and I'm in a very professional career' recited a lot. (In fairness I did more or less the same, without the running though. That'll be the day.) The one down part about meeting so many guys all in one night was that by the end, I wasn't really sure who I had what conversation with. I loved one conversation about House of Cards, then in another we talked about football - he was a ManU fan, thanks be to baby Jay. I even had a bitchy conversation with one guy about people getting married and having kids, oh how we scoffed at them! I wish I could have had some extra paper to write little bullet points down beside each of their names, so I could remember better as I was super excited about continuing them on. After all, who doesn't like football or bitching!?

My two major face palm moments of the night? (apart from one guy looking at my tattoos and asking if I did drugs) One poor soul told me I looked no more then 30, in what I'm sure he thought was his most charming manner. Naturally he sweated for the next 2 minutes until the bell went for us to change seats again. I would say this is my fault as I told him he looked very young, but telling someone they look young is always a compliment. And if men are reading this, never tell a 22 year old they look 30. That lad is lucky to be able to tell the tale! My other foot in mouth moment was when I (boldly) took out my phone to read a text as the guys were moving seats. My friend said to brag about being a doctor to the next person who sits down. Only the man was actually a doctor and I loudly exclaimed 'Fuck off!'. As in a 'no way, thats funny I just got a text,' way. Only I didn't manage to explain until 5 minutes later after the poor guy wiped tears away from his eyes from laughing at me so much. (Note to self: Don't tell any future doctor date to fuck off. Poor fella.)

GetOut claim that 70% of people get matches for each event they attend. And if you don't find anyone that takes your fancy, then they give you the chance to go again for half price. If thats not totally great and enabling, I don't know what is. In my honest opinion would I go on a speed date again? (if I was single that is) Yes, 100% I would go again. Hell, I might even go again and bring a friend just for the craic of an unusual night out. The sigma attached to speed dating has gone out the window for me and I would love if everyone did it, even just once.  I'll admit it does have some flaws, but what part of dating doesn't. I'd recommend it to any age group and GetOut offers lots of different activities and events. So go on, give them a look over here and tell them that Cat sent you! (Then email me your stories if you do decide to go on one of these nights! I can't be the only one to bring extra knickers and tell a doctor to fuck off!)

GetOut.ie
speed dating currently has special offers on for April if you fancy it too! 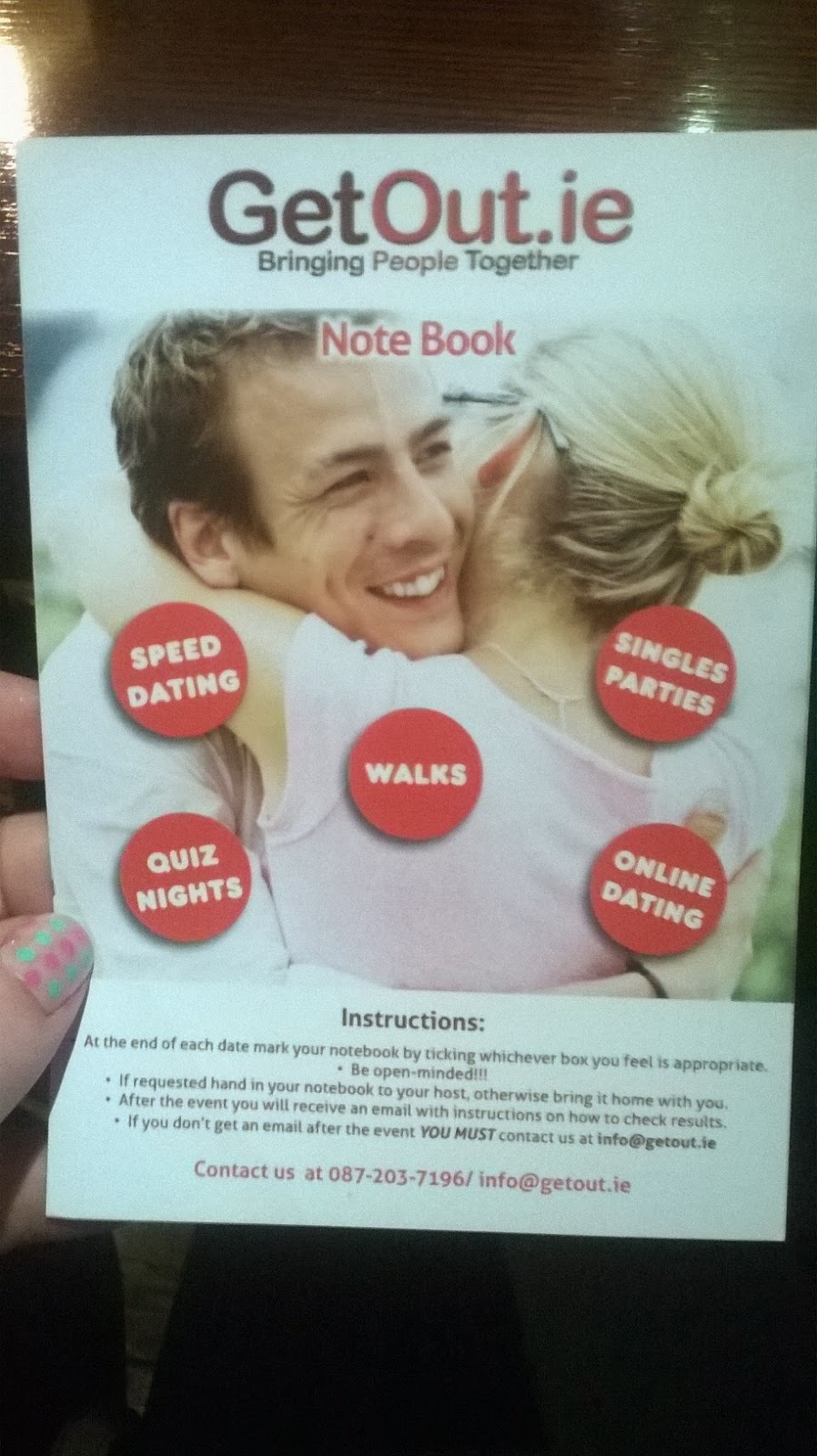